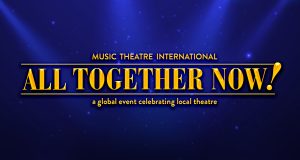 CTP will be celebrating its 25th anniversary (albeit in its 26th season) with a production of All Together Now! – A Global Event Celebrating Local Theatre. Performances are November 12 & 13, 2021, at the Concord City Auditorium.

Theatre companies around New Hampshire and the world will be performing this exciting musical revue all on the same weekend in November to celebrate our collective return to live theatre. Music Theatre International is licensing the show free of charge so that groups around the world can present the show as a fundraiser.

Our CTP 25th Anniversary version of the show will include Broadway favorites past and present, including songs from Come From Away, Waitress, Beauty and the Beast, Jekyll and Hyde, Godspell, Guys and Dolls, Matilda, Newsies and others.

Our CTP teens (ages 12 and up), CTP young adult alumni, and a few adult “guest stars” are now rehearsing.

*co-founder of CTP, along with Karen Braz
Note: Choreographer Juliette Anderson is also a CTP alumna.