The first time Wayland Bunnell and Lacy Long went to see White Rabbit, Red Rabbit, they had no idea what to expect. Neither, it turned out, did the actor performing the show.

Despite the fact the play has been performed worldwide and enjoyed a 42-week Off-Broadway run with stars like Nathan Lane, Whoopi Goldberg, Darren Criss and Cynthia Nixon, White Rabbit, Red Rabbit, by Iranian playwright Nassim Soleimanpour, is a theatrical enigma – the show that no one is allowed to talk about. Actors who appear in this one-person show must never have seen it before, and do not even lay eyes on the script until it’s handed to them at the start of the play. There is no rehearsal, and no director. Only the bravest of performers take on this challenge. For some actors it’s their greatest nightmare, but for others it’s a unique opportunity to use their skills in real time. Both actor and audience experience Nassim’s play simultaneously.

Bunnell and Long were so intrigued by the show that they went back a second time to see another actor in the play. While each actor performs the same script, each one brings their own skills, style and interpretation to the play, so that each performance is unique. White Rabbit, Red Rabbit is theatre that asks you to serendipitously meet Nassim through his words, and to leave your phone on!

Bunnell and Long, both longtime members of the Community Players of Concord, knew they had to bring this piece of theatre magic to Concord audiences. Thanks to the pandemic it’s taken two years, but now the Community Players are pleased to present White Rabbit, Red Rabbit at the Hatbox Theatre. 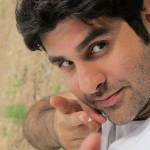 Nassim Soleimanpour was a conscientious objector who refused to do mandatory military service, and therefore could not obtain a passport. So instead, at age twenty-nine, he penned a play that helped him vicariously travel the world without borders. Spread solely by email, blogging and social media, this intriguing and innovative play has been performed to critical acclaim worldwide.

There are nine performances at the Hatbox Theatre – each featuring a different actor – over the three weekends from September 10-26, 2021. Show times are Fridays and Saturdays at 7:30 pm, and Sundays at 2:00 pm. The actors, in order of performance, are Steve Lajoie, Alex Picard, Eric Skoglund, Deirdre Bridge, Katie Collins, David MacNeill, Aaron Compagna, Chris Avery and Katie Dunn-Law.

Come be a part of the discovery and excitement!

From the license agent: URGENT: All media and press agents: This play is NOT overtly political, and should not be portrayed as such. It operates on a deeper, metaphoric level, and very expressly avoids overt political comment. We therefore ask the press to be judicious in their reportage.