the Community Players of Concord, NH / Current Season / The 39 Steps 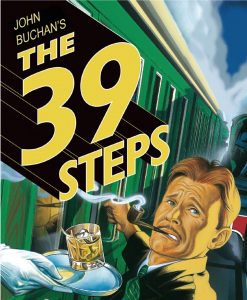 For SEASON TICKET information and an Order Form, CLICK HERE!

Drawing on Alfred Hitchcock’s 1935 film of the same name, this Monty Python-like spoof follows Richard Hannay, a bored Canadian living in London, who meets a mysterious woman claiming to be a spy. After inviting herself to his flat, she alludes to her mission to thwart a shadowy conspiracy to steal vital British military secrets and warns that she is being pursued by assassins intent on stopping her. She mutters something about “the 39 steps” but soon ends up dead with a knife in her back. Our unwitting hero goes on the lam to avoid being framed for murder and is chased across Europe by both the police and the murderous enemy, defying death through one seemingly impossible scrape after another.

This frenetic farce combines mishaps, mistaken identities, and plenty of physical comedy from a talented cast that must toggle between a myriad of outrageous characters at lightning speed. With plenty of tongue-in-cheek allusions to other Hitchcock classics and some hilarious stagecraft, this show is sure to please.

Margaret and others — Julia Kehr

Pamela and others — Suzanne Watts

THANKS TO OUR TWO SHOW SPONSORS!

The 39 Steps is presented by arrangement with